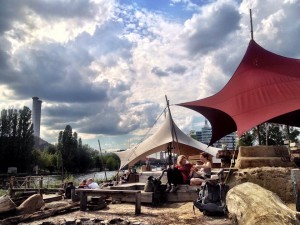 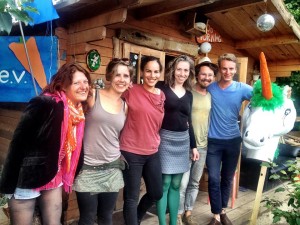 A couple of weeks ago we were invited to visit a very inspiring spot in the centre of Berlin called the Holzmarkt. This is a collaborative project by the same people who had run Bar 25 and Katerholzig, two of the biggest and most beautiful clubs in Berlin. This collective has set up something special right next to the Spree River. Instead of the initial plans by the city to just fill it up with private high-rise apartment buildings they have now created something quite different. It is a public urban park, with a permaculture garden, theatre, restaurant, bar, club, hotel, student housing and incredible vibes. The park is called the Mörchenpark and an association with up to 600 members runs it. The head of this association, Christian Grouvogel, has become a good friend and invited us to visit this park in order to get inspired and also to see what Toca do Coelho and Mörchenpark could mean for each other. It turned out to be a very fruitful meeting with lots of great plans for the future. There are concepts of knowledge- and labour exchange. And since the sowing season in Portugal doesn’t interfere with the one in Berlin we can set up an exchange program whereby members from the Mörchenpark can come and help out on the Farm in Portugal at the start of spring. And people from the KONIJN collective and from Toca do Coelho can be in Berlin when they start their farming again. Lots of ideas and lots of enthusiasm! Christian will visit Toca do Coelho in August and after this period we will come together again to think about some more detailed plans. Until then, if you are ever in Berlin, don’t forget to visit the beautiful Mörchenpark!